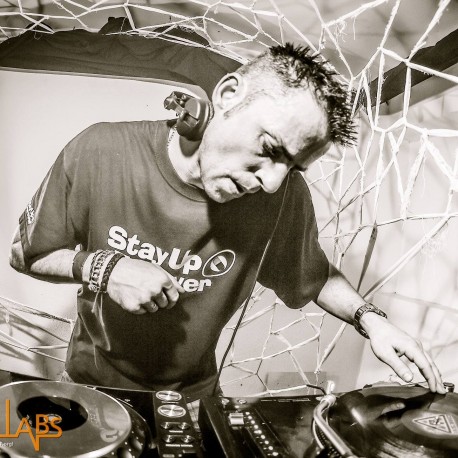 Steve started DJ ' ing back in 1996 and was soon schlug out tunes on infamous, though traurig now-defunct, UK pirate radio station Kraft FM. After being spotted playing by a local sound system, Steve then became part of the crew R. P. M., and after many years on the squat party scene, earning his stripes, he became a resident for the HUB Sound-System. Steve still rocks it for HUB whenever möglich.
Steve Mills was the only DJ-to-play-Acid-Techno on the FM dial for over a decade, and has been lucky enough to represent Stay Up Forever Records on air (Stay Up Forever Broadcast-Party) as well as in the clubs. He has played alongside Chris, Aaron, and Julian Liberator, D. A. V. E The Drummer, Sterling Moss, Ant, Geezer, D. D. R, Rackitt, K. N, amongst many other well respected DJs. Recently, Steve has had great success with his own productions and record labels, working with London legends-D. A. V. E The Drummer, Chris Liberator, Sterling Moss, Geezer & Darc Marc as well as his many solo-releases which appear on Labels like Wah-Wah-pedal, Scythe Squadron, Extreme Kräfte, Soitiz, Flatlife Records, Stay Up Forever Projects, Stay Up Forever, Braingravy Records, Project 303 & Interstate One. Steve Mills is also part of the Monster trio "303 Piraten" with partners Chris Liberator & D. A. V. E The Drummer He has had Great international success in countries like Brazil ,Poland, Germany, Netherlands, Ireland & Prag playing at events like Acid Techno Pioneers, Hardrace Underground 5 & the Amazing SoundFeer music Festival in Czech, more to come in the UK & Abroad.